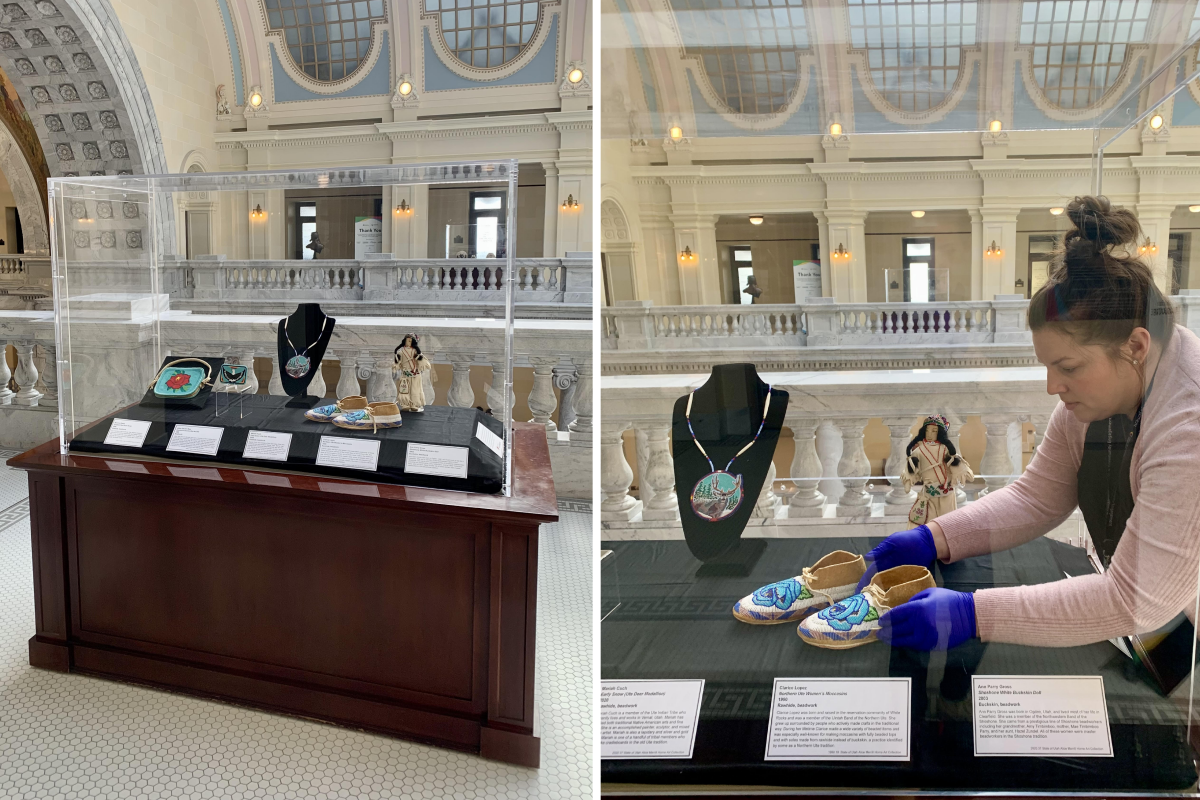 Before the holidays, our team installed Native American folk art pieces from our State of Utah Alice Merrill Horne Art Collection at the Utah State Capitol. The pieces on display were chosen from each of the six major tribal groups present in Utah (Ute, Navajo, Shoshone, Paiute, Goshute, and Hopi). These works will be on display on the fourth floor of the capitol’s west wing until April 21. To view our full Folk Arts Collection, please visit this link.

Information about the artists and their pieces on display can be found below:

Mariah Cuch
Early Snow (Ute Deer Medallion)
2020
Rawhide, beadwork
Mariah Cuch is a member of the Ute Indian Tribe who currently lives and works in Vernal, Utah. Mariah has studied both traditional Native American arts and fine arts. She is an accomplished painter, sculptor, and mixed media artist. Mariah is also a lapidary and silver and goldsmith. Mariah is one of a handful of tribal members who still make cradleboards in the old Ute tradition.

Bernice Steele
Goshute Red Rose Purse
2006
Rawhide, beadwork
As a member of the Goshute Tribe, Bernice Steele is both an accomplished beadworker and basket maker. She is one of just a few native artists in the Tooele area who can still make winnowing baskets and cradles from locally harvested willow.

Earl & Verna Pikyavit
Paiute Baby Moccasins & Paiute Youth Moccasins
1988
Buckskin, beadwork
Earl Pikyavit was a member of the Kanosh Band of the Southern Paiutes. He tanned the deer hide used for both of these pairs of moccasins while Verna, his wife, sewed them together and added the decorative beadwork. The floral and geometric designs on both moccasins represent the two major motifs found in Paiute beadwork.

Lillian Decker Bear
Shoshone Beaded Belt Buckle
1988
Beadwork
Lillian was born in Nevada and was a member of the Te-Moak Band of the Western Shoshone Tribe. As a young woman, she moved to Grantsville, Utah, to be near her mother who had relocated there. While she attended Indian School as a child, Lillian did not become interested in traditional crafts until the 1970s. She quickly learned by watching her mother-in-law and by making her own creations. Lillian is known for her beaded moccasins and belt buckles.

Ann Parry Gross
Shoshone White Buckskin Doll
2003
Buckskin, beadwork
Ann Parry Gross was born in Ogden, Utah, and lived most of her life in Clearfield. She was a member of the Northwestern Band of the Shoshone. She came from a prestigious line of Shoshone beadworkers, including her grandmother, Amy Timbimboo, her mother, Mae Timbimboo Parry, and her aunt, Hazel Zundel. All of these women were master beadworkers in the Shoshone tradition.

Bonnie Burbank Bitsinnie
Yei with Necklace Basket
1995
Willow
For the Diné (Navajo), Yeis are supernatural beings, or gods, who sometimes assist people when they are sick or in need of help. Yeis are generally depicted as elongated figures with skirts or kilts. Male Yeis have round faces, while female Yeis, like the one woven here, generally have square or rectangular heads. On this particular basket, the artist has attached a beaded necklace and black lacing onto the surface of the completed basket, giving the Yei more texture and three-dimensionality.

Clarice Lopez
Northern Ute Women’s Moccasins
1990
Rawhide, beadwork
Clarice Lopez was born and raised in the reservation community of White Rocks and was a member of the Uintah Band of the Northern Ute. She grew up surrounded by people who actively made crafts in the traditional way. During her lifetime, Clarice made a wide variety of beaded items and was especially well-known for making moccasins with fully beaded tops and with soles made from rawhide instead of buckskin, a practice identified by some as a Northern Ute tradition.

Earl Denet
Hopi Katsina “Koyemsi” (Mud Head)
2002
Whittled wood, feathers
Earl was a resident of Riverton, Utah. Earl was strongly encouraged by his father, Joseph, to continue Hopi traditions, so he began carving kachinas as they would have traditionally been made in Sichomovi. This is referred to as the “Old Style” and was popular in the late 1800s. Hopi kachina dolls are made from the roots of the cottonwood tree. Kachinas represent the spirits of all aspects of nature and act as guardians or messengers, offering guidance and blessings.

Mary Holiday Black
Navajo Yei Vessel
2007
Willow
In Diné (Navajo) cosmology, both human and divine forces are governed by certain rules that maintain safety. When rules are broken, the divine Yei must be supplicated through a medicine man to return hozho, or harmony. Harmony is traditionally achieved through the performance of a ritual that involves the creations of a sand painting of Yei spirits, chanting, and dancing. The beauty of the sand painting is to be absorbed by those seeking healing. Diné baskets, like this one, are a more permanent display of these beliefs around healing and cosmic harmony between humans and the divine.