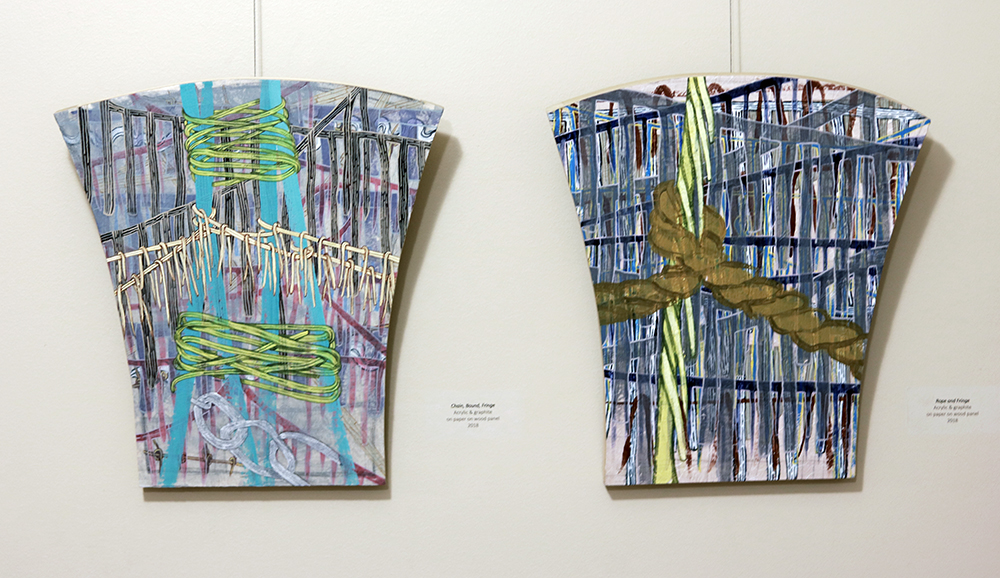 The language of fabric has been the foundation and springboard of Laura Sharp Wilson’s work for the past two decades. Her earliest paintings were of threads formed into chaotic knots, later work utilized flat botanical imagery giving plants human powers.

Wilson says, “I love fabric for so many reasons. It is woven together like a society, that it can represent the female realm, that it can be sewn, pulled apart, ripped, it can rot, it can have a pattern, and a pattern can be dissected. Fabric can transform a person with clothing and costume, or an interior, with rugs, curtains and upholstery. “

In her current work, Wilson is looking back at the people who expanded this country’s population. People like her great grandparents who unraveled their lives, came to America settled and re-wove their existence. Her Irish, Scottish and Swedish great grandparents fought hard to elevate themselves in this country but in the process ignored those already here. Wilson struggles with the fact that these people, a carpenter, a small town doctor, a house painter, a textile importer, plopped down in a country with a, “racist, oppressive social system, and carried on, changing little, for the poor, non-white and indigenous of this land.”

Can bound empty spaces represent a deep insecurity? Can transparency and opacity suggest ignoring others? Can a structured or chaotic weaving portray a society? Wilson thinks so. In her images, the fabric of people’s lives is dissected and broken down into threads, strands, rope, shapes, patterns and chains, which are allowed to bind, constrict, envelope, unravel, create webs, outline, cover up, and reconcile. A new narrative appears illustrating internal feelings of turmoil and confusion which beg to be sorted out and clarified. She says, “In making this work I feel part of the discourse this country is currently having about where we come from, who we are and what we want to be.”