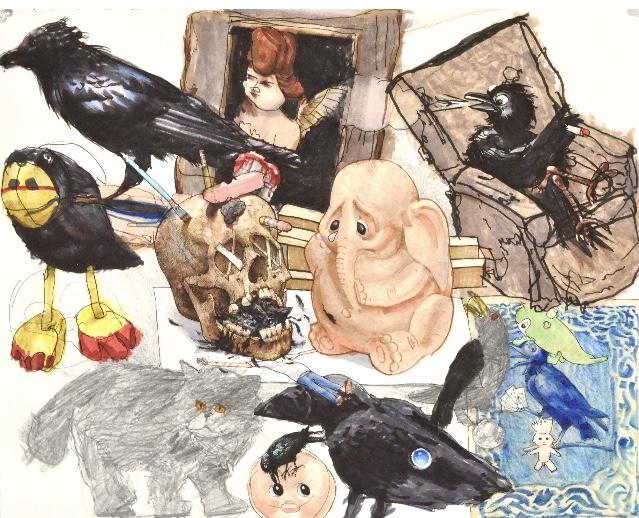 From the curator: “Like clockwork at 10 a.m. every Monday, Wednesday, and Friday, Willie Smith, who has mild Down syndrome, accompanies his father Tony from their home in the Avenues to their West-side studio across the street from the Mormon-operated Welfare Square in Salt Lake City. Willie immediately goes to his drafting table placed next to his father’s and gets right to work—no distractions, intense concentration—while Tony cranks up the sound system and begins his own drawing. Using colored markers and pens, this father-and-son teamwork on individual projects and collaborate on others, often playing off each other’s effort. Recently, they’ve taken up the challenge of seeing how far they can push commercial coloring books and paint-by-number kits, with “number 42” being Tony’s favorite color. Results are fantastically satisfying to those few who have seen them, especially the collaboration pieces.

And there began the idea for an exhibition by not only Tony and Willie but also Tony’s eldest son Evan who is art department chair at West High School. Evan comes by the studio, usually on Wednesdays after classes, to join the collaborative fray. “There’s some great stuff going on when the three of us get together,” said Tony. “That is, if we can keep Willie from getting his hands on the fat black redacting marker.” The small viewing circle of their work will be greatly expanded while 3SMITHS is on exhibition at The Alice Gallery.

The individual and collaborative work by Tony, Evan, and Willie is inventive, mostly humorous, illustrates how it is not always a strength to “stay within the lines.”