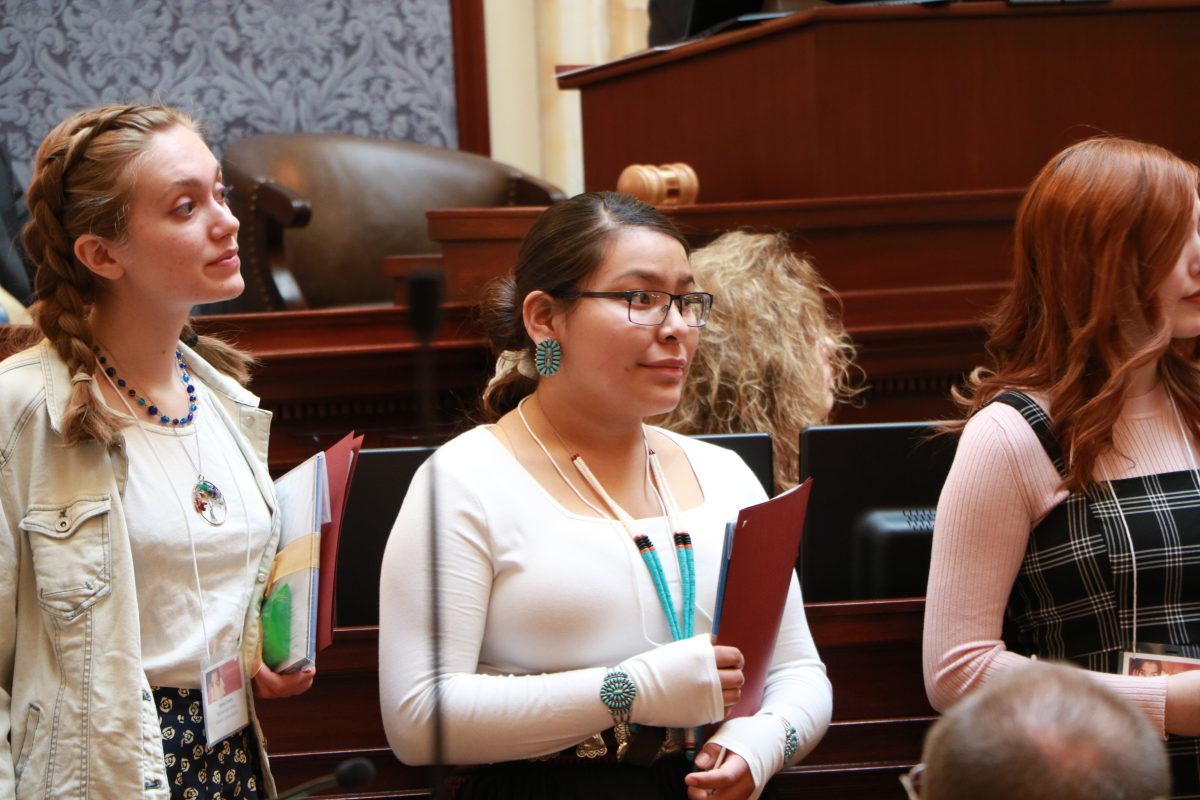 In the Montezuma Creek community, where Georgiana Simpson teaches art at Whitehorse High School, she is providing learning opportunities in a supportive environment. In particular, she encourages students to reflect on their own personal strengths as tools for success.

“I encourage my students to use their strengths and skills to help others,” Simpson said.

This year, Simpson inspired freshman Leyonah Endischee to use her strengths as an artist to enter the Utah State Senate Visual Arts Scholarship Competition, in which dozens of high school students statewide competed for a chance to win scholarships and recognition.

Endischee used this year’s theme of “Inspired Utah” to create a piece called “Patterns of Warriors” about the Navajo Codetalkers. Her artwork, which incorporated a style of Japanese film and television animation called anime, depicted a single code talker with an array of colors and geometric design surrounding him. Through her artwork, she wanted to showcase how the Navajo Codetalkers helped during World War II while also incorporating her cultural heritage into a modern art form.

Her artwork won third place among the more than 200 submissions, and among the winning artists, she was the only Diné student. On February 21, Endischee and 21 other artists from around the state were honored by state senators on the floor of the Utah Senate. Endischee also received a $1,000 scholarship through my529, an educational savings plan established by the state. She is grateful she earned this opportunity to showcase her art skills and educate elected officials and others about the Navajo Codetalkers and the communities of Montezuma Creek and Aneth.

Endischee has been drawing all of her life, but she strengthened her craft by taking Simpson’s Art Foundation class. Endischee hopes that people can learn to use art to relieve stress or even as a form of meditation. She remembers her late grandmother using coloring books to lower stress.

“Do what inspires you,” Endischee said she tells people wanting to create art.

Her mother, Miranda Salt, plans to display the winning artwork at home, as a reminder of her daughter’s significant accomplishment. Although Endischee is still deciding on what to do after high school, she is thinking about entering art school or college. In the meantime, she’s busy with her regular high school classes, art creations, and student government group.